The history of snow skiing has its roots in Northeastern Europe, in an area comprised of today’s Nordic region including the Baltic states of Lithuania, Latvia, and Estonia as well as Russia. The Nordic region includes the following countries and isles:

However, snow skiing has grown in popularity and has been adopted as a popular sport and activity in many ski disciplines such as alpine and cross-country skiing which is regularly enjoyed in the United States, Canada, South America and Asia.

The origins of snow skiing have its roots, not in sport, but in an essential form of transportation. It is an ancient activity. Archeologists have discovered aboriginal drawings of snow skis in Central Asia that are 5,000 years old. Similar archeological discoveries have been found in Finland, Sweden, Norway, and in the receding glacial areas of Iceland. Many of these ancient drawings depict human figures hunting with crude bows and blunt instruments while holding sticks (what we have come to be known as ski poles) for balance in deep snow and icy conditions.

The Oldest Known Pair of Skis

The evidence that early man adopted the use of a crude wooden plank into an essential tool of survival was validated in the twentieth century.

In 1938, the oldest skis were discovered in Finland and with carbon dating, a scientific procedure, were determined to have been approximately 5,200 years old. Those carbon dated findings provided anthropologists with the necessary evidence to expand their study of how early man, and hunter-gathers coped with the climatic conditions in many snow-bound geographic regions that were mostly inaccessible during cold, wintry seasons.

A Mode of Transport Becomes a Sport

Although snow skiing was once used as a mode of transport when climatic conditions necessitated man invent way to move when snow impeded mobility, as a sport, skiing began as a popular winter activity in the early 1800s in Scandinavia. During that time in the evolution of snow skiing the sporting, adventure and outdoor enthusiasts began creating organized winter sporting events such as sanctioned ski races and competitions. In 1843, a Norwegian newspaper was the first to report the results of competitive skiing races and similar events.

For the next 80 years remaining in the nineteenth century, snow skiing grew in popularity and international acclaim. Records of the first, ski clubs were created in 1860. New ski competitions made their way into Nordic culture. Ski jumping competitions began in 1862 and cross-country (Nordic) skiing in 1884. In Western Europe, the sport of snow skiing made its way into the Austrian Alps in 1893.

Within a few short A few years later, the popularity of snow skiing was attracting the interest of a new generation of sports enthusiast that sought to push the creative envelope of skiing into new winter sports activities. Snow skiing was transitioning from sport that has once been the used as a mode of transportation for Northern Europeans in a global phenomenon.

In 1938, snow skiing and snowboarding organizations were being formed throughout the world. Interest and popularity grew. That growing popularity would soon fuel a burgeoning commercoal ski industry. Experts point to the Winder Olympics in Germany not only as hosting the first globally sanctioned downhill ski race competition but also as evidence that snow skiing had transitioned from an regional activity into a world-wide participant and spectator attraction, and vast commercial industry.

The evolution of snow skiing has also led to the development of the Paralympic Games and the addition of women’s ski jumping as part of the activities. Additional types of skiing, or mogul and freestyle skiing, became a part of the Winter Olympic games as well. Ski dancing and ski archery represent the newest types of ski snowing activities.

Currently, ski resorts number just over 480 in the U.S. Also, over 40 European countries feature snow ski activities on their roster of winter sporting pursuits. Resorts in Austria, France, Switzerland, and Italy offer the most skiing activities. With technological advances in gear and equipment, snow skiing continues to grow in popularity in the travel and leisure markets. This increasing growth includes athletic competitions, such as the Winter Olympics and similar skiing events.

Skiing continues to maintain its popularity as a well-loved snow and wintertime activity. In fact, the sport has developed into one of the most engaging activities internationally. All ages of people the world over like to ski. Therefore, skiing enthusiasts engage in 3 main types of snow skiing activities. These activities include Alpine skiing, Nordic skiing, and freestyle skiing techniques.

Usually, more experienced downhill skiers use longer skis because they can stay stabilized at higher speeds. Safety bindings on the skis help prevent injuries, as they separate the skier from the skis if he or she falls down. While the first ski boots were made of leather, the footwear, today, is made in two parts. A hard outer shell provides protection while foam and other materials inside the boots warm the feet. Skiers use 2 poles to keep their balance and direct the skis.
Popular downhill ski resorts in the U.S. include sites in Aspen and Vail. Resorts in Europe highlight ski areas in St. Moritz in Switzerland; Val d’Isere in France; Arlberg and Kitzbuhel in Austria; the German Garmisch-Partenkirchen ski resort; and Italy’s Sestriere Resort.

Nordic skiing includes ski jumping and cross-country skiing. This form of skiing began as a mode of transport in the Nordic countries of Norway, Sweden, and Finland, thus the reason for skiing cross-country. Cross-country skiing, the most popular type of Nordic skiing, involves gliding over hilly or flat areas and along wooded trails on skis. Skiers move along by thrusting their ski poles into the snow while striding forward. This form of skiing not only offers good exercise for burning calories, it also strengthens the skier physically.

Compared to Alpine skis, Nordic skis feature a narrower and lighter design. While Alpine skis display a metal edge, the material is not used for edging Nordic skis. Cross-country skiers use longer poles than Alpine skiers as they must exert more force to move forward.

Ski jumping, also a form of Nordic skiing, entails gliding down a steep ski track and flying from a platform at the end. Judges assess jumpers on the distances of jumps and on their jumping form and style.

Free styling in skiing represents a type of skiing where skiers perform difficult or unique moves or execute various stunts. This ski activity, which began and developed in the 1960s and 1970s, involves 3 main forms. In the ballet form of free styling, skiers ski down a slope and jump and spin on their way. During aerial free styling, skiers leap from a platform, then perform flips or spin aerially. Mogul free style skiers ski on large bumps (moguls) in the ground, going at high speeds.

Do you ski at resorts only during the winter or visit all year round? If so, many resorts such as the HINTERUX glacier in Austria offers skiing 365 days per year. In North America, the Whistler Blackcomb resort in British Columbia is another place where winter sports enthusiasts can ski almost all year round.

Whether you are a member, occasional visitor, or new to SnowSkiing.com, we hope that you enjoy what you read and visit us again soon as we continue to add fresh content and community features. If you have any suggestions or comments we look forward to hearing from you.

Guide to the Sport of Snow Skiing

We have assembled some fast facts and trivia about snowskiing from around the world. This information was compiled from a variety of sources including Statista, Wikipedia, and the Olympic Games website. 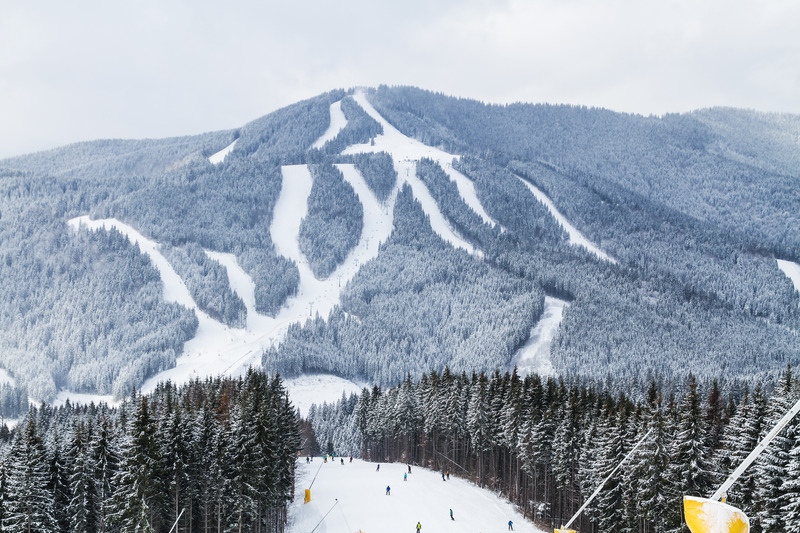 Below is our profile containing facts and information to familiarize you with the sport of Snow Skiing.

This site is supported by ads. Please help us out and disable your ad-blocker.